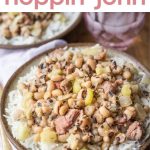 Instant Pot Hoppin’ John – create this classic Low country dish in next to no time in your pressure cooker!

It’s the dish that black eyed peas are most well known for and now we’ve recreated a pressure cooker Hoppin’ John recipe with the usual traditional ingredients of rice, black eyed peas, onions and a smoked turkey leg for added flavor.

It’s so easy to make this instant pot Hoppin’ John a fraction of the time that it normally takes on the stove,  and we even have a quick cook method that works if you haven’t had time to pre soak the black eyed peas.

What is Hoppin John?

In the Deep South where I live, Hoppin’ John is a classic dish made with black eyed peas and is traditionally served on New Year’s Day as it’s thought to bring good luck in the New Year to those who eat it. It’s often served with Collard Greens, which you can also make in your pressure cooker!

Also known as Carolina Peas and Rice, this is a very simple meal usually made with pork, rice and peas. It has been on the go for a very long time with the first recipe for Hoppin’ John appearing in Cookbooks as early as the 1840’s but slaves had been making some variation of pork, rice and peas for a long time before that.

Hoppin’ John can be easily traced back to the Low Country of South Carolina before becoming popular all across the Southern United States.  Where I live in Mississippi most people make it with Black Eyed Peas, but in South Carolina field peas are more commonly used.

What are the ingredients for Instant Pot Hoppin’ John?

The main ingredients for Southern Style pressure cooker Hoppin’ John are typically rice, peas of some kind, usually black eyed peas or field peas, and some type of smoky salty meat to flavor the peas as they cook, such as ham hock or smoked turkey leg.

I cooked my pressure cooker Hoppin’ John the first couple of times with ham hocks and while the flavor was very nice they didn’t yield much in the way of additional meat to mix in with the rice and peas, so this time around I cooked them with a smoked turkey leg and it was much better!

A Perfect dish any day of the year but it is traditionally served on New Years Day with Collard Greens. 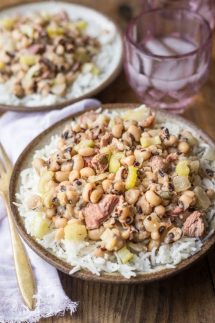 HOW TO MAKE PRESSURE COOKER RICE FOR HOPPIN’ JOHN

I’ve tested this recipe multiple times and have based the cook time around the ‘quick soak’ pressure cooker method as outlined in the recipe. If you have presoaked the beans overnight then the cook time may be a little different depending on how long you’ve soaked them for.

The desired level of ‘doneness’ will vary from person to person, this assumes you’re using the quick soak method and should create soft but not mushy black eyed peas. 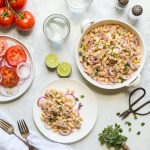 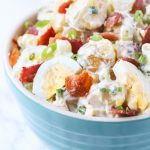 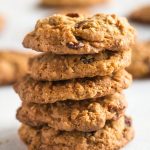 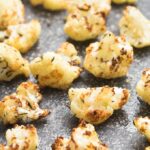 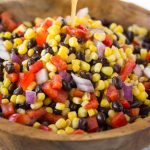 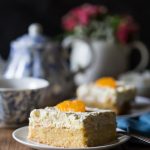 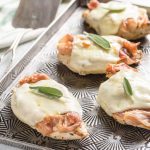